1. What is power loss protection (PLP)?

PLP protects all data in the SSD against corruption when power is removed unexpectedly with a system of capacitors, controller function and firmware that manages the shut-down of the drive. Below is a diagram that shows the internal voltage and operations between Insignis drives with and without PLP, as well as an inferior consumer grade SSD which would have internal voltage follow the external voltage supply and result in an improper shut-down.

It is difficult to test the robust operation of an SSD against data corruption. Even a poorly designed drive will not show data corruption when it is idle during power interruption. Most suppliers will claim their drives are not subject to data corruption because most customers will not be able to dispute this claim. Insignis drives are engineered from end to end with harsh environments in mind, including the possibility of an unstable power supply. 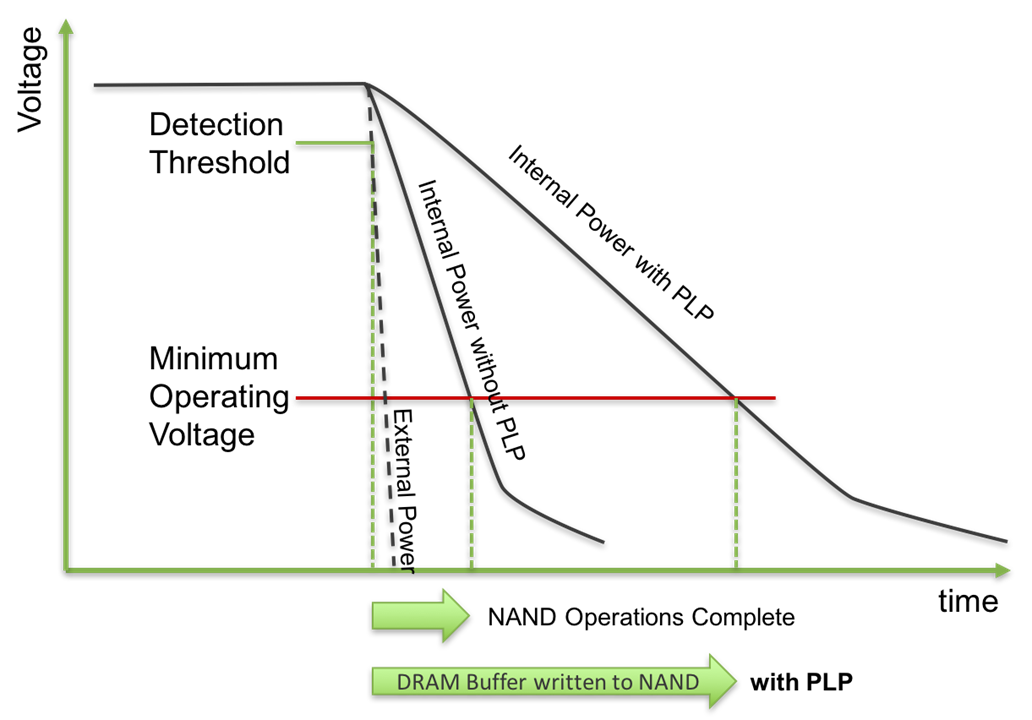 During normal solid-state drive (SSD) operation, data is temporarily stored in the DRAM cache memory to improve write performance by buffering data between the host interface and the NAND flash memory. However, DRAM memory is volatile and does not hold data without a continuous and stable power supply. During a  standard power-off process, the system issues a STANDBY command to the SSD device, then the data in DRAM is flushed to NAND memory, updating the latest metadata, FTL and user data.

PLP is a system of capacitors, controller functions and firmware that manages the shut-down of the drive in the event of unexpected power loss, without the system issuing a STANDBY command. The capacitors store enough energy to temporarily support device operation when the external power is removed. The capacitor bank needs to be large enough to power the device while a full DRAM cache worth of data is written to the NAND.

The capacitor bank alone is not sufficient to implement PLP. Power control circuitry, as well as firmware implementations, are necessary to both protect user data during a power loss event and to ensure that when power is restored, the device is ready to use and the data intact.

Insignis PLP SSDs for industrial applications are equipped with tantalum capacitors which offer several advantages over aluminum electrolytic supercapacitors. Because they contain no liquid electrolyte to dry out, tantalum capacitors can last for decades. They are also able to operate in a wide range of temperatures, making them highly suitable for use in harsh environments, and they have a high volumetric efficiency.

3. What about drives without PLP?

While PLP guarantees end-to-end data integrity, including data in the write buffer, some users may feel it is not necessary for their application. Insignis offers drives without PLP, that does not preserve the write buffer but still protects the NAND data integrity and functionality in the event of a power loss. The most basic SSD has the potential to corrupt user data which has already been written to NAND, or to corrupt SSD metadata, without some provisions to ensure a clean shutdown.

Insignis drives are built with robust power protection to ensure against unstable or transient power spikes. This protection still comes into play during an unexpected power loss by ensuring that all NAND operations in progress can run to completion, including the persistent storage of metadata, as indicated in the diagram above.

Insignis’s industrial series SSD is designed to withstand the industrial environment, including a wide range of temperature and less than ideal power supply conditions. Ordinary consumer electronics may fail at the worst possible time due to these environmental conditions or power fluctuations, or even if they do survive, may suffer from corruption of the data on the device.